The idea for an expedition to the North Pole by snowmobile came about in 1966. Ralph Plaisted, an insurance salesman in Minnesota, and a friend decided they would make the trek to the North Pole across land and ice. In July 1966, they founded the Plaisted Polar Expedition Inc., a non-profit organization with a mission to raise the enough money to carry out the expedition.

Ralph Plaisted contacted members of the military, researchers and industrial companies, as well as the Minnesota-based Ski Doo® distributor Halvorson Equipment Inc., to let them know about the project. Halvorson Equipment Inc. was enthusiastic, and contacted Bombardier Ltée. The company agreed to provide two snowmobiles along with its own experts—Jean-Luc Bombardier and Pierre Drouin—who would join the expedition.

The company was thrilled with the idea of participating in the adventure to reach the North Pole. The trip would be the perfect opportunity for the company to test the resistance of its snowmobiles in extreme conditions. 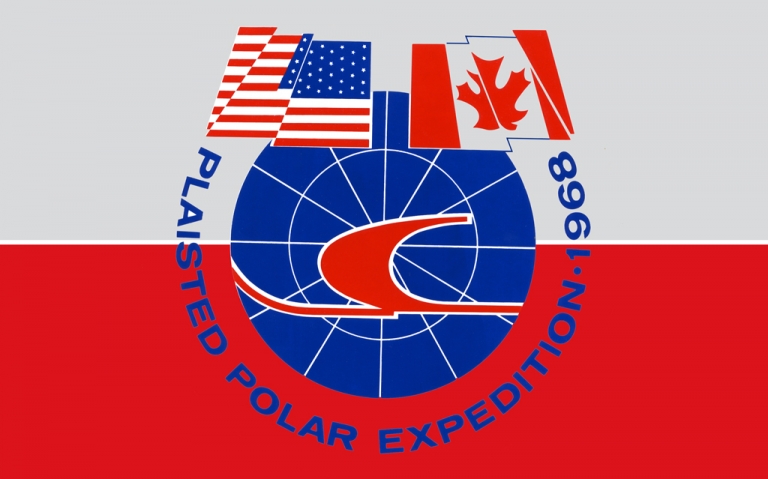 Carrying out a project of this magnitude required significant investments. The company provided the snowmobiles, and other businesses contributed to the project with donations of food (Pillsbury), electronic equipment, fuel, clothing, heaters, camping equipment (Coleman), communication devices and advertising. All of these items would be tested under the extreme conditions of the Arctic. 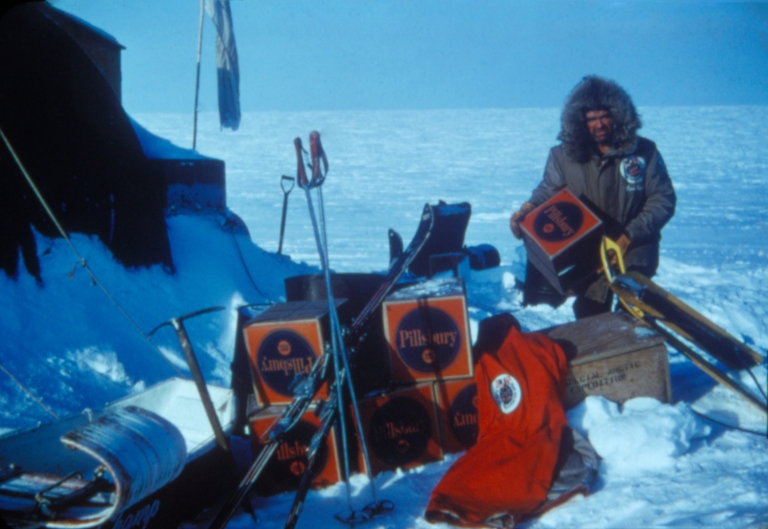 Crates of food from Pillsbury

Food had to be rich in protein. Some was prepared ahead of time, some on site. Pillsbury provided food manufactured for astronauts.

The team wore clothing specifically designed for the expedition, based on traditional clothing worn by the Inuit. This included parkas and overalls made of goose down and wolf fur the provided protection in temperatures ranging from -35 to -65 0C. The mittens were made of caribou leather.

The Ski-Doo®  snowmobiles were modified as follows: 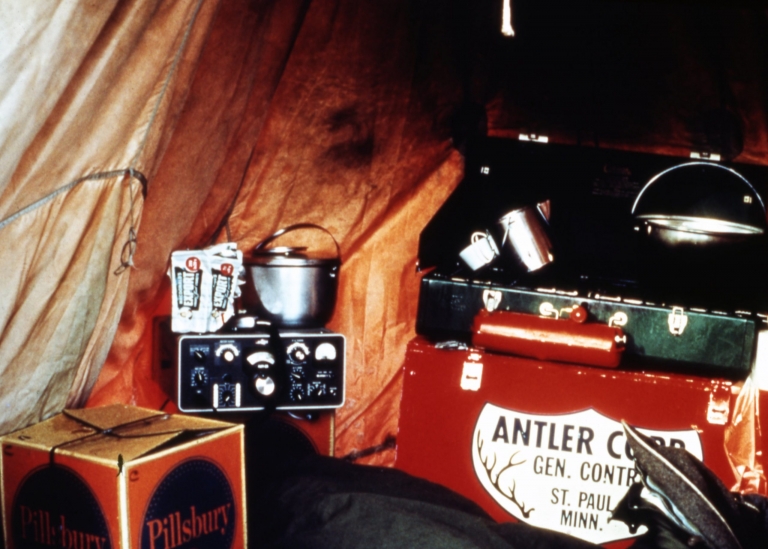 The snowmobiles were also equipped with a Styrofoam flotation system that allowed members to cross stretches of thin ice—let’s not forget that the North Pole is in the middle of the Arctic Ocean! Although Arctic temperatures keep the ocean ice-covered for most of the year, which facilitates access to the North Pole, the extreme cold is also the greatest enemy of man and machine.

Before departing, the expedition members familiarized themselves with survival techniques and how to handle the equipment. For example, a team member received a packet of Space Food Sticks from a Pillsbury representative.

Base camp was manned by about a dozen people. It was their job to keep the expedition well supplied on the ice, to relay the team’s progress by radio, to take weather readings and maintain permanent contact with the expedition members as they moved forward.

The team out on the ice was composed of four people:

The team out on the ice had an objective: to brave the weather conditions and difficulties specific to the Arctic as they made their way to the North Pole. 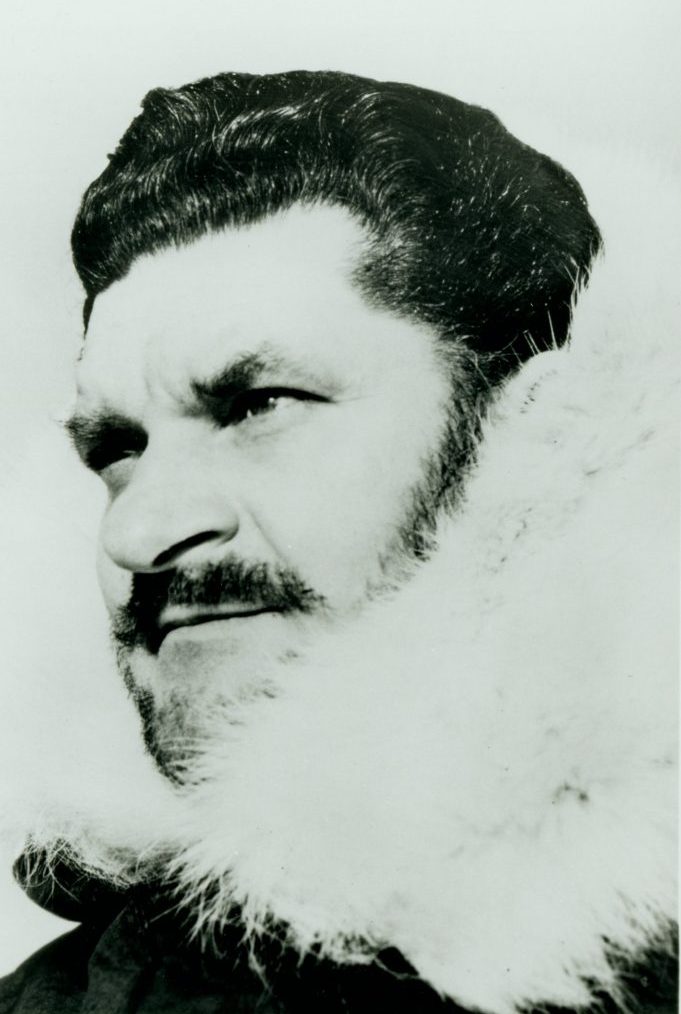 The team set off in the late March 1967. Base camp was set up at the Eureka weather station on Ellesmere Island, Nunavut, 1,125 km from the North Pole. Due to a combination of inexperience and bad weather conditions, this first attempt came to a premature end. They headed home in early May, after 37 days of hard work. However, the team gained experience and the expedition provided excellent training for the harsh conditions of the Arctic.

In 1968, the team was ready to embark on their second attempt to reach the North Pole. They set off earlier in the season—one month earlier than the 1967 attempt—with the hopes of taking advantage of more permanent ice coverage. Their starting point was 800 km from the North Pole, 320 km closer, straight line distance, than in 1967. The expedition members had gained experience, and were confident that, this time, they would succeed. 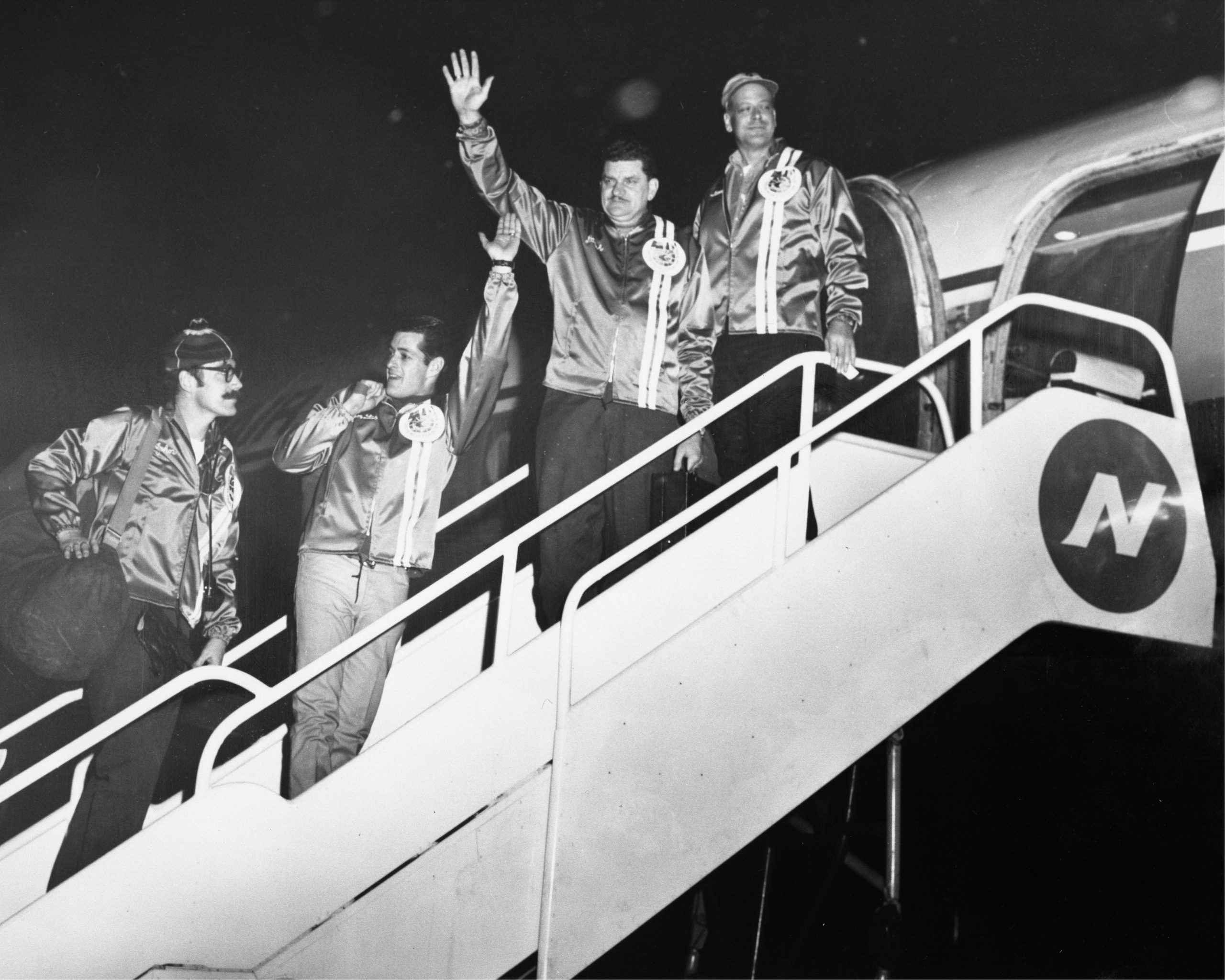 The members of the expedition leave Montreal for Frobisher Bay 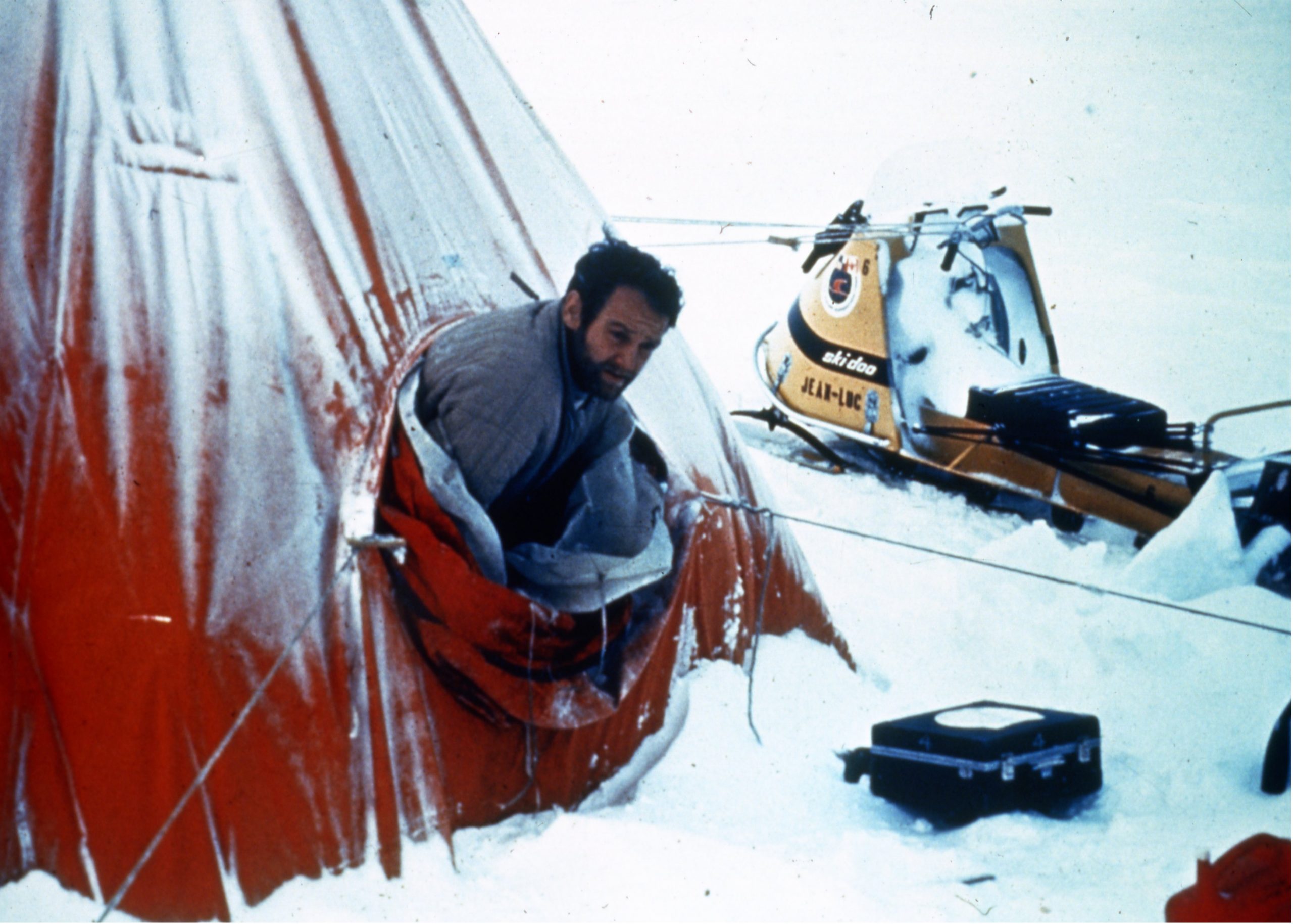 Walt Pederson notes the magnitude of the storm

February 22: Departure from Montreal on board a Douglas DC-4 aircraft, for Iqualuit, formerly Frobisher Bay, Baffin Island, Nunavut. The next day: Departure for Resolute Bay, on Cornwallis Island. It was so cold, around –58 °C, that the motor of the aircraft froze.

March 2: Departure for Ward Hunt Island, the last point of land before the North Pole and the site of base camp. The group was 800 km straight line distance from the North Pole, latitude 90° North.

March 7: Departure from Ward Hunt Island by snowmobile, headed for the North Pole. Temperatures were around -60 °C. After six days, the team had travelled a mere 56 km.

March 16:  A severe storm delayed travel for one week. The team waited in complete isolation, without contact with base camp, reconnaissance aircraft, or supply drops. The Plaisted team finally began moving forward again on March 23.

April 10: Open water slowed the expedition down. Detouring around openings in the ice, the team logged a significant amount of extra time and miles.

April 20:  A United States Air Force weather reconnaissance plane verified their position at the North Pole. They returned to base camp by plane.

Challenges met during the expedition 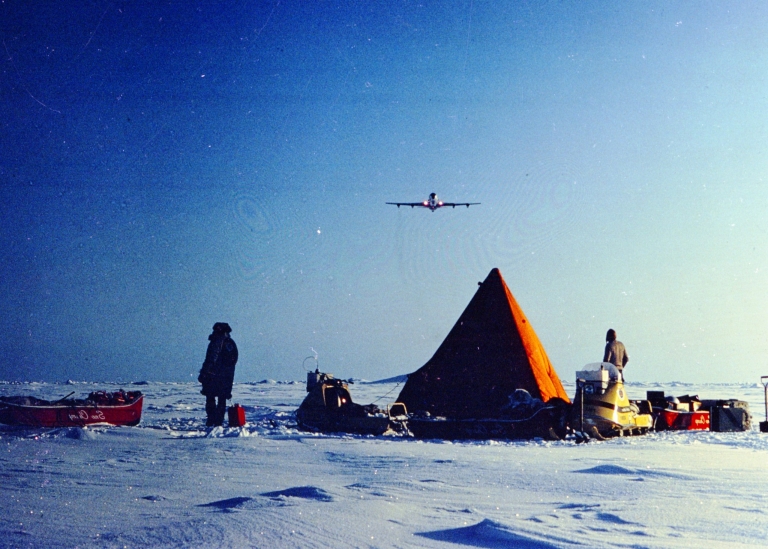 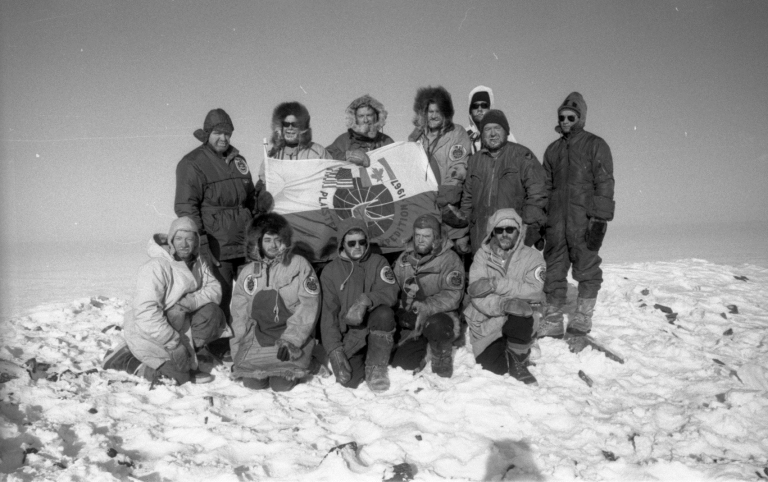 The The Plaisted Polar Expedition – 1968 was the first expedition to reach the North Pole overland. Their position was confirmed by a United States Air Force weather reconnaissance plane.

It’s interesting to note that Bombardier Ltd. played a key role in the expedition, providing $125,000 worth of assistance. Today, that would be the equivalent of $850,000!

How did Jean-Luc Bombardier become a member of the expedition?

Joseph-Armand Bombardier’s nephew joined the ranks of L’Auto-Neige Bombardier Ltée on graduating from university. Like his uncle, he was a skilled snowmobiler. By the end of the 1960s, Jean-Luc was the company’s driver of choice.

Ralph Plaisted wanted to use the Ski-Doo® to reach the North Pole; it seemed only natural that a company representative, who was not only fearless but also a snowmobile expert, accompany the group of explorers. And that’s how Jean-Luc joined the expedition to the North Pole. 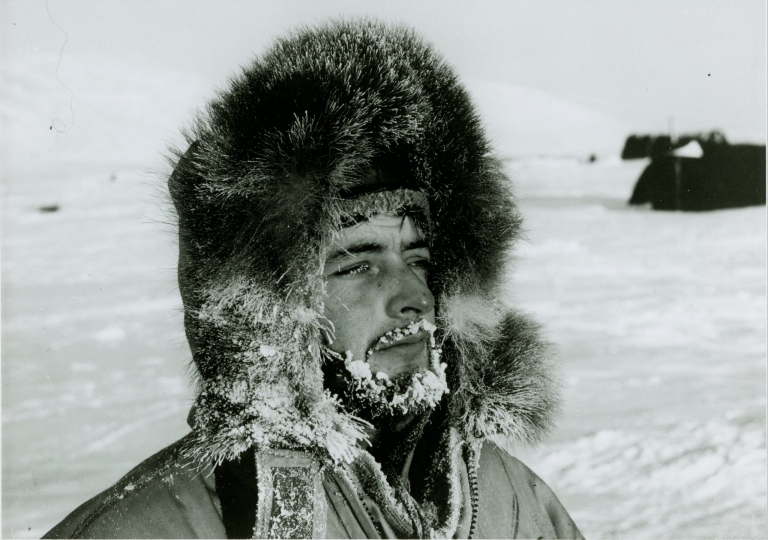